This sector continues to grow quickly, driven in part by skilled workers registering as self-employed to capitalise on tax incentives.

The rapid growth of this sector – which comprises of companies established by solo entrepreneurs and the self-employed – has transformed the face of employment in the UK. 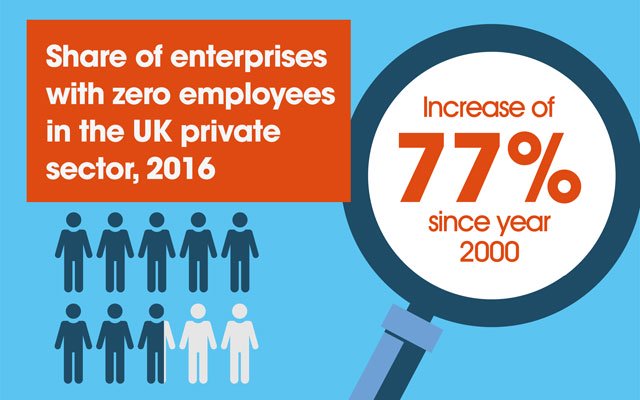 The sector now accounts for four-million of the UK workforce, an increase of 77% since the year 2000.

There’s been significant growth in the number of businesses with zero employees across the UK, but London leads the trend with an uptick of 45% since 2010 alone.

Rather than a great flowering of UK entrepreneurship, these figures reflect the ever-growing ranks of the self-employed (or “gig economy”).

Whilst Uber drivers and Deliveroo cyclists and drivers are the face of the gig economy, according to research by the Resolution Foundation, 57% of overall sector growth since 2009 was driven by the so-called “privileged” sectors, which include banking, public administration and advertising. In the main, this is a consequence of highly skilled freelance workers registering as limited companies to take advantage of tax benefits.

While the growth of self-employment in the “privileged” sectors paints a picture of prosperity, 60% of the self-employed are employed in “precarious” sectors, including cleaning and construction, where they’re likely to enjoy minimal remuneration, employment rights and protections.

Microbusinesses, also known as microenterprises, are defined by the UK government as any firm with any two of the following:

In just the last 15 years, the number of UK microbusinesses has grown by around a third – from 3.5 million in 2000 to 5.3 million in 2016. Microbusinesses are now the largest segment of British business by size, and the sector looks set for further growth thanks to the changing way we work, live and do business. 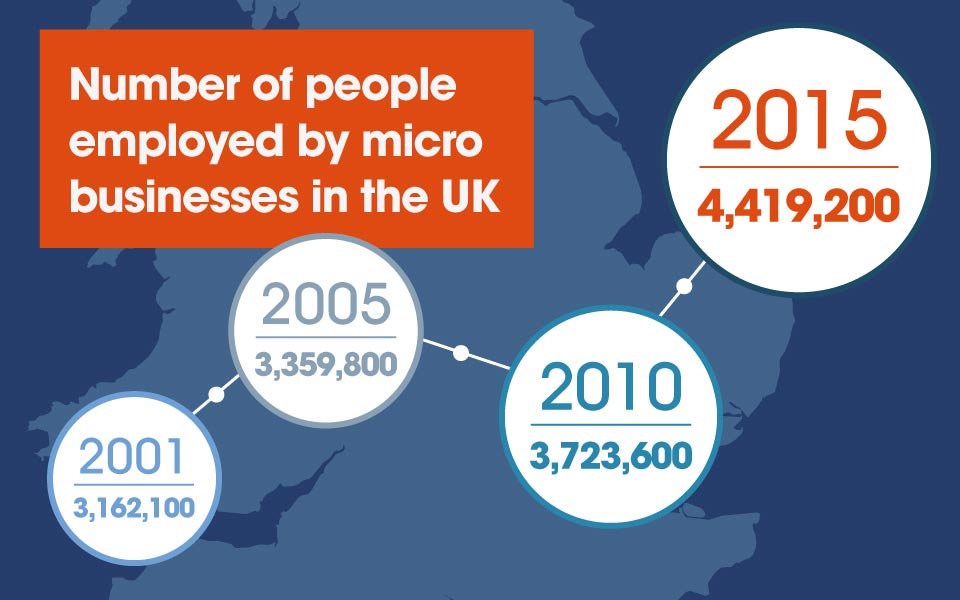 Perhaps the biggest driver in this trend has been improvements in communications technology, which has made it easier and more affordable to set up a business and take a product or service to market.

Today, a business can be started with just a laptop – or even a smartphone – and an Internet connection, helping to foster a growing entrepreneurialism in the UK.

They are over-represented in the UK’s fastest growing business sectors, including education, computer programming and human health activities, such as personal training.

Another key trend supporting the growth of the microbusiness sector is outsourcing, with larger firms seeking to cut costs by giving jobs to smaller contractors, such as IT support, accounting and cleaning.

The definition of a small and medium-sized enterprises (SME) varies around the world, but in the UK a business is held to be an SME if it meets any two out of the three following criteria:

It is worth noting that, because of the way that SMEs are defined and official statistics are compiled, figures for SMEs also tend to include microbusinesses.

SMEs account for 60% of all private sector employment in the UK and are growing in number too. There are two million more SMEs in the UK today than there were in 2000.

They are well represented in all industries and business sectors, with strong showings in construction, which includes 975,000 SMEs – just under a fifth of the total in the UK.

There are also considerable numbers of SMEs operating in the professional, scientific and technical sector (823,000 or 15%), as well as the wholesale and retail, manufacturing and repair sectors (all 10%).

Though relatively small in number, mid-sized businesses (MSBs) certainly punch above their weight when it comes to their contribution to the UK economy.

They are often considered the engines of growth in the economy and include some of the nation’s fastest growing businesses.

Despite making up only around 1.5% of the UK business population, or about 30,000 firms, MSBs generate around a third of the nation’s turnover. 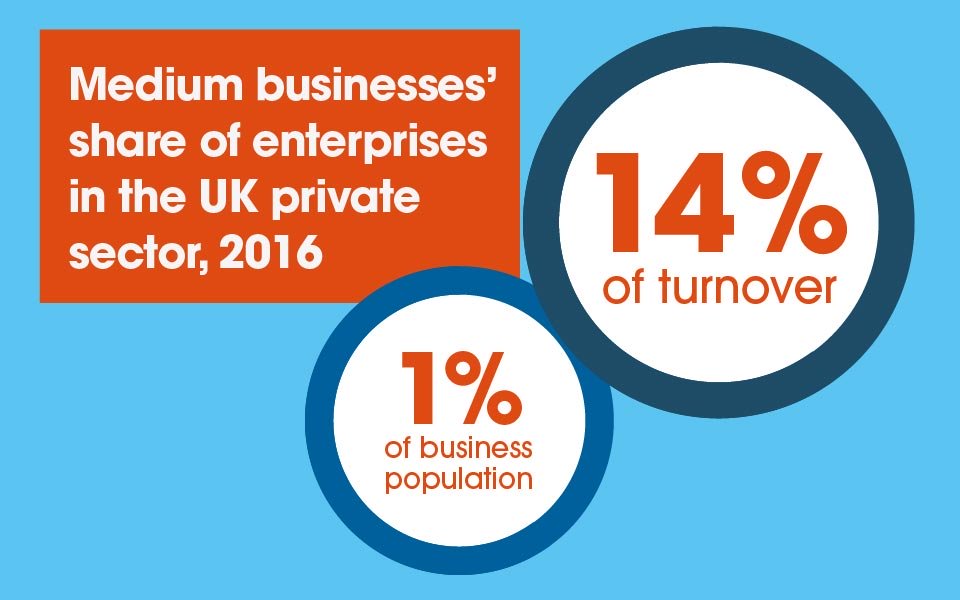 And they are thriving too. Recent research has found that UK MSBs grew faster, added more to their profits and recruited more people during 2016 than the nation’s largest and smallest companies combined.

According to the most recently available data, the largest numbers of MSBs are to be found in wholesale and retail, followed by vehicle repair, manufacturing and professional activities, such as accountants and solicitors.

London is home to the biggest proportion of MSBs, followed by the south east and the north west.

Commentators have argued that, despite MSB’s important role in driving prosperity, they can often be overlooked in terms of government support, especially when compared with SMEs, and they don’t have the clout of larger firms when it comes to getting the ear of policymakers.

MSBs ongoing success is good for smaller firms in their supply chain too, as 70% of British MSB suppliers are based in the UK.

Large businesses are defined as those with more than 250 employees, and account for 40% of UK employment and more than half of turnover.

Though the number of large firms has grown slowly since the turn of the century, their importance to the economy remains fundamental.

Iconic businesses like BP, HSBC and Tesco are known around the world and are huge contributors to UK PLC, both in terms of revenues and jobs.

Larger firms are more likely to be foreign owned than smaller firms. More than a quarter of owners of large UK businesses are based overseas, led by the USA, followed by Germany, France and the Netherlands. 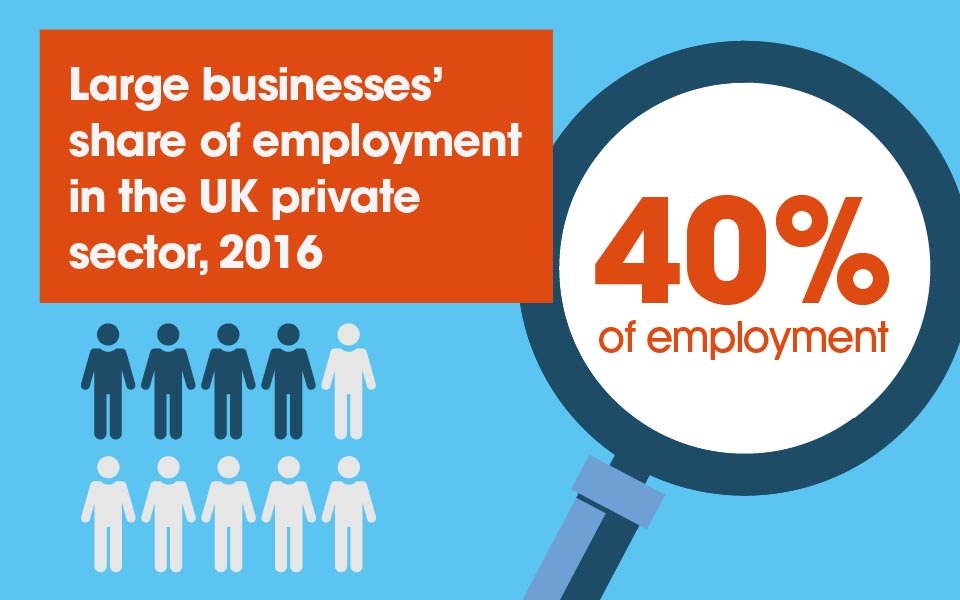 That makes large firms a bigger employer than any other sector by size, while as a share of turnover, they make up an even bigger proportion of UK revenues than they did a decade ago.

Larger firms are also more likely to have the capability to invest in research and development, including innovating new products.

There is a growing trend among big business to innovate by fostering start-ups in their sector that are developing potentially disruptive technologies. That is generally through equity investment, backed with mentoring, access to facilities and training.