The East of England economy is incredibly diverse, with strengths from traditional agriculture to manufacturing, but in recent years, cutting-edge scientific innovation has emerged as a driving force in the region’s prosperity.

The region leads the UK on research and development investment, including innovative new products, and has attracted international tech firms including Apple, Microsoft, Samsung, Cisco and Huawei to set up home there.

The presence of The University of Cambridge, and the pipeline of talent that it provides, has helped the region to build a global reputation for Research and Development, in a range of fields from health and pharmaceuticals to ICT and advanced manufacturing.

That has also spread to Norwich, where Norwich Research Park is one of Europe’s largest research centres with more than 12,000 staff and £100 million annual research spend. There’s a similar story in Ipswich, where BT’s Global Research and Development Campus is based, employing more than 3,000 people.

This cluster of expertise has also proved to be entrepreneurial, with a healthy number of tech start-ups opening up in the region.

That has provided inspirational success stories like Improbable, the virtual simulation start-up which was co-founded by two Cambridge computer science graduates in 2012 and was valued at more than $1bn earlier this year (2017) 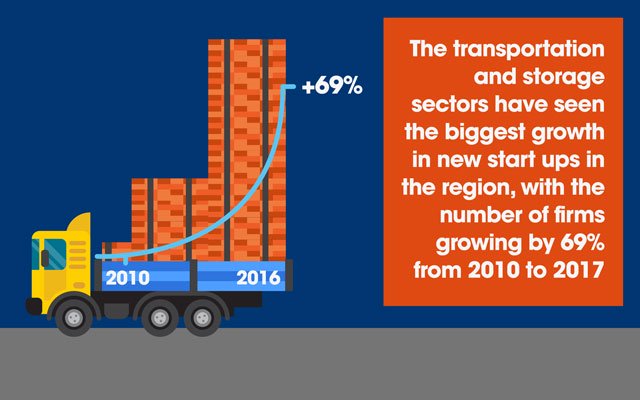 Though the rate of new start-ups is slightly lower in the East of England than the UK average, growing 23% since 2010 to 310,685, many of these firms are high growth, with the potential to create substantial wealth.

The biggest growth in new start-ups was seen in the transportation and storage sector, which is everything from air and land transportation businesses, to warehousing, logistics and postal/courier services. From 2010 to 2017, the number of firms in this field increased by 69%.

Transportation and storage businesses in general saw great results in Luton particularly, where the number increased by a massive 196%. This exponential growth is down to numerous contributors, including air transport services such as Luton Airport. The airport has seen unprecedented expansion in terms of passenger numbers, and is an attractively compact and convenient option for air travel for people in the area.

Luton has also seen a significant increase in the number of real estate businesses, which almost doubled between 2010 and 2016. In 2016, it was identified as the top-performing UK town for house price growth.

The biggest rise overall in the East of England was seen in water supply and sewerage businesses, which rocketed by 239%.

Significant investment in offshore energy has also boosted the region’s ports and logistics sectors in recent years, while Felixstowe is the UK’s largest container port.

Less positively, the East of England’s mining industry has taken a hit, with the number of businesses in this sector decreasing by 8%. Compared to the great successes seen throughout the rest of the region, this was the only industry in the area to not show growth.

There’s little sign of the region’s Research and Development businesses uprooting anytime soon and The University of Cambridge will continue to deliver a fresh pipeline of talent for the region.

The East of England will also welcome government plans to invest in the local road infrastructure, designed to reduce congestion and further boost the economy.