The passenger air transport industry includes all British companies that transport passengers on scheduled domestic or international flights. The sector has seen considerable decline in the number of operators since 2010, largely down to the limitations of UK airports. Most recently, budget airline Monarch ceased trading in October 2017 after posting large losses.

The number of businesses working in the passenger air transport sector fell by 23% from 1,065 to 820 between 2010 and 2017 with a disproportionately high number of smaller firms affected.

One of the reasons for this is because of the limited capacity at British airports. As a result, acquisitions are the main form of entry to the market.

In 2014, this capacity diminished further when passenger planes stopped flying from Blackpool Airport after 105 years.

Consumer confidence drives the success of this industry. When people feel confident about the economy and their earnings prospects, the number of passengers on planes increases.

These days, domestic and business travellers are very conscious of the amount they pay for air travel, which has resulted in a higher level of price competition. 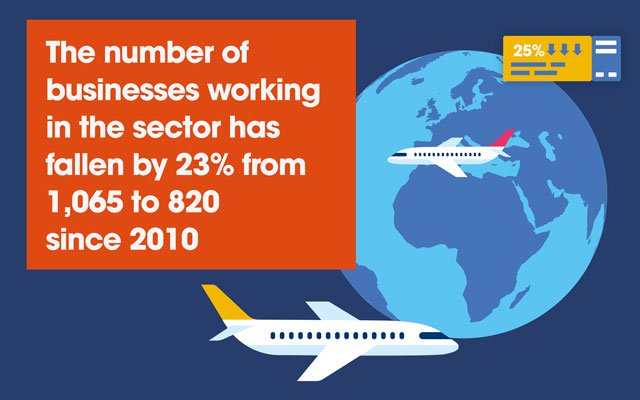 According to IBISWorld, a market research company, the industry is highly concentrated, with the four biggest players expected to account for more than 80% of industry revenue in 2017-18.

In the UK, the market leader British Airways accounts for just under half of all revenue generated from UK passenger air transport.

Nonetheless, all airlines have been negatively impacted by increased price competition and rising costs.

Looking at specific regions of the UK, while the East of England has seen success with the recent expansion of Luton Airport, proposed developments at Stansted Airport, such as a second runway, have been abandoned. Overall in the region, there has been a 42% decrease in the number of businesses operating in the air passenger transport sector. In the resort town of Great Yarmouth, the drop was even greater at 100%, due to Caister Road's airfield and heliport relocating to Norwich in 2015.

In Wales, there has been a 29% decline in businesses in this sector

In Wales, there has been a 29% decline in businesses in this sector, driven by the 100% decrease in Flintshire and Swansea. While there are still passenger airports in these areas, predominantly serving private planes, development has slowed in recent years. Conversely, the Vale of Glamorgan, which is home to Cardiff Airport, has seen 100% growth, thanks to significant investment in the international airport's future, including a revamped terminal.

There has also been an overall decline in air passenger transport businesses in Scotland, where the 28% drop has been driven by the 100% decreases seen in both Aberdeen and Glasgow. Again, while there are passenger airports in these areas – both international, in this case – passenger numbers at Aberdeen Airport have been in decline for some time, while at Glasgow Airport they have started to pick up again from 2017.

After many years of debate and consultation, a proposed third runway at Heathrow Airport now looks likely to be built, though a timescale has yet to be decided. The new runway is predicted to add up to £61 billion to the economy and create as many as 77,000 jobs.