This sector is currently experiencing rapid growth, largely due to technological advancement and government policy.

The electrical sector includes large companies such as National Grid, which transmits and distributes electricity nationally, plus smaller-scale power stations that are connected to regional distribution networks, along with electricity generation businesses.

The number of businesses operating in electric power generation, transmission and distribution has increased 557% from 1,090 to 5,555 since 2010 - a growth of 410% in seven years. 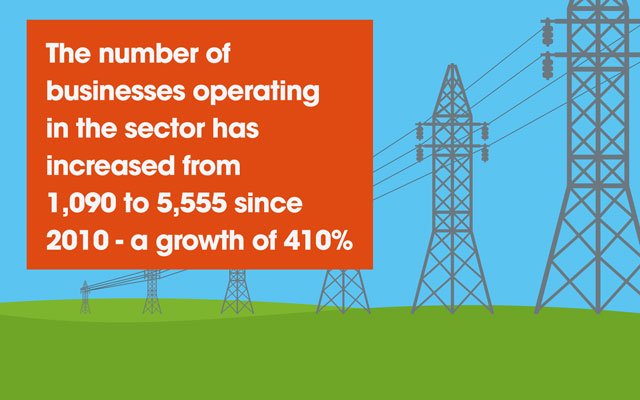 This rapid growth could be down to support from technological innovation and government policy. However, the growth could also be attributed to the “micro generation” of electricity by home and business owners putting solar panels and wind turbines on their premises or land, of which there are now more than a million in the UK.

One of the main reasons for this is because of the government's Feed-in-Tariff (FiT) and Renewable Obligation (RO) schemes which promote renewable energy.

These schemes have allowed property owners to generate their own low-carbon energy, safe in the knowledge that they’ll receive a fixed tariff for an agreed period following installation, while also being able to sell any electricity they don’t use back to their supplier.

The popularity of these schemes has resulted in an increasing number of companies being established to create, supply and install the renewable technology needed to meet demand.

Greater London has seen the biggest increase in electricity supply businesses, which have grown by 904% in the region – this is 587% more than the rest of the UK. Due to continual growth in the capital, the capacity of the network has had to expand. There have been some interesting developments in the sector, including the recent launch of Angelic Energy, London's first not-for-profit energy company, plus the arrival of Italian firm Green Network Energy and renewable energy start-up, Bulb, in 2016.

In the South London borough of Southwark, the number of businesses dealing in electric power generation, transmission and distribution has grown from five to 90. This is a massive 1,700% increase, and futuristic electric car charging points are one example of development in the area.

A 264% rise in electricity supply businesses has also been seen in the South East, and West Berkshire’s number of electricity generation, transmission and distribution businesses have grown exponentially, from five to 95 – that’s a 1,800% increase!

There has also been a 388% growth in electricity supply businesses in the South West, with the number of companies supplying electricity, gas, steam and air conditioning increasing by 1,250% and 900% in Somerset and Bristol respectively. In Bristol, Ovo Energy closely monitors wholesale gas and electricity prices to offer low rates to its customers, while Bristol Energy, which launched in the city in 2017, has a range of special deals for local customers.

In the East Midlands, electricity generation businesses have grown by 308%, from 65 to 265. This has been driven by large organisations such as Western Power Distribution, following increased demand in the region. There has also been a surge in the number of electricity and air conditioning suppliers, with businesses in Northamptonshire rising by 100%, and 450% in Leicester, where firms such as Yü Energy have recently set up in the city.

An increase of 107% in electricity supply businesses has been seen in the North East, with wind farms leading the way. In Northumberland, where several large wind turbines have just been installed off the coast, there has been a huge 500% increase in electric power generation, transmission and distribution businesses.

In Yorkshire and the Humber, which is home to French energy firm Engie, electricity supply businesses have increased by 184%, while the East Riding of Yorkshire has seen a 900% growth in the number of electric power generation, transmission and distribution businesses. This has been driven by developments such as a £35 million biomass power plant, which opened in Tasterne in 2017.

Meanwhile, in Scotland, which is leading by example when it comes to renewable energy, there has been a rise of 266% in electricity supply businesses. Aberdeenshire has seen a huge increase of 1,050% in the number of electric power generation, transmission and distribution businesses, which have jumped from 10 to 115. Companies such as Aberdeen Community Energy, which has developed the area's first hydroelectricity initiative, have contributed to this growth.

Looking ahead, a major growth area is expected to be the battery-storage market which will allow home and business owners to store the surplus electricity they generate for the first time.