When Britain's last operating deep coal mine shut in December 2015, it consigned to history a once mighty industry that had employed more than one million people at its height in the 1920s.

But as gas and nuclear power became increasingly prevalent from the middle of the last century, the decline of the British coal mining industry was regarded as inevitable. The number of firms in the sector has declined by 10% since 2010.

In light of the above, and the general lack of confidence that currently surrounds some parts of the sector, it's perhaps unsurprising that mining is witnessing an ongoing decrease in the number of operating businesses – something which has been ongoing since the 1970s. 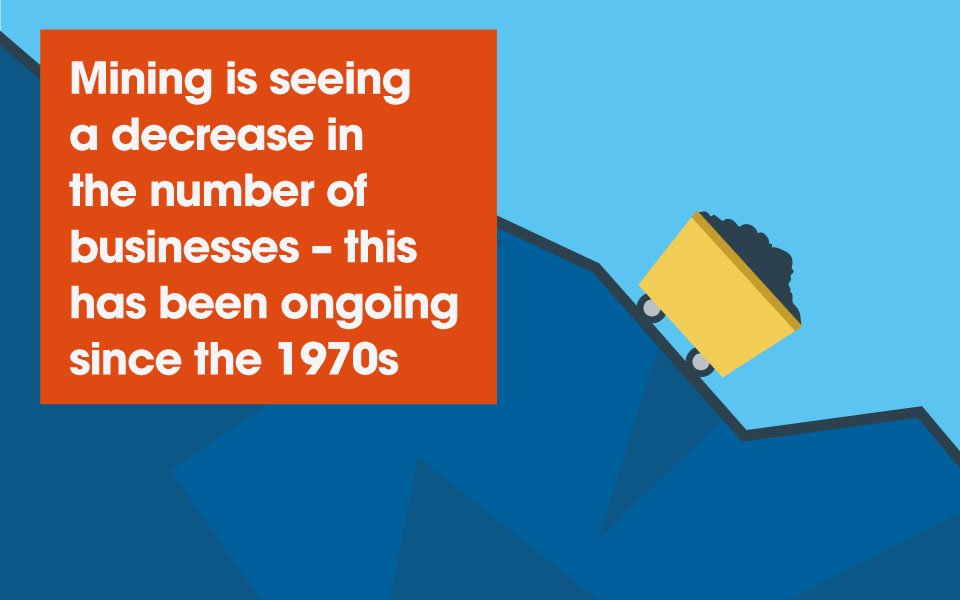 Nonetheless, ambitious UK mining companies - and particularly those with an overseas presence – are still achieving growth thanks to emerging opportunities in the sector.

For example, in 2015, automotive and energy storage company Tesla signed early stage agreements with mining companies to supply its new ‘gigafactory’ in Nevada with lithium, a key ingredient in batteries.

The deal clearly signalled to the world’s lithium miners that new customers are not frightened to explore high-risk, high-return alternatives when they find that current market conditions do not suit their needs.

Focusing on specific areas of the UK, the East of England has seen a decrease in mining businesses at 8%. This is slightly less than the UK's average decrease of 10%. There's still a number of different types of mines operating in the area, including chalk, clay and crushed rock mines.

The North East's number of mines has dropped by 13%, with an even greater decrease of 33% in Northumberland. The mining landscape may be due to change, however, as an opencast coal mine has been proposed on the Northumberland coast.

A decline of 13% has also been seen in the South East. In Buckinghamshire, there has been a 67% reduction in mining activities, however there are still some quarries operating in the area today. Plus, former mines such as the Hellfire Caves near High Wycombe have now been repurposed as tourist attractions.

Meanwhile, in Yorkshire and the Humber, businesses in this sector have dropped by 17% overall, and by 33% in Leeds. Kellingley Colliery, the UK's last deep coal pit, closed in 2015, marking the end of an era for the industry.

A 19% drop was seen in the South West, where metals such as tin and copper were commonly mined. Businesses in the county of Devon decreased even further, by 22%. Australian company, Wolf Minerals, recently redeveloped the Drakelands Mine in the village of Hemerdon in Devon, which produces tungsten and tin.

The emerging market for lithium could make long-closed Cornish tin mines economically viable again. High lithium levels have been identified in Cornish mines, but there has been no market for the mineral until recently.