The greatest market share of printed material, in terms of turnover, now lies with advertising literature and business stationery (32%) followed by newspapers, magazines, books and brochures (21%).

The remaining share consists of: printed packaging like cartons and labels (20%); printing onto non-paper and board (11%); "other" printing (11%); and "security" printing, including banknotes and passports (5%).

Printing continues to be affected by the inexorable rise of digital media and this is reflected in the decreasing number of businesses operating in the sector. 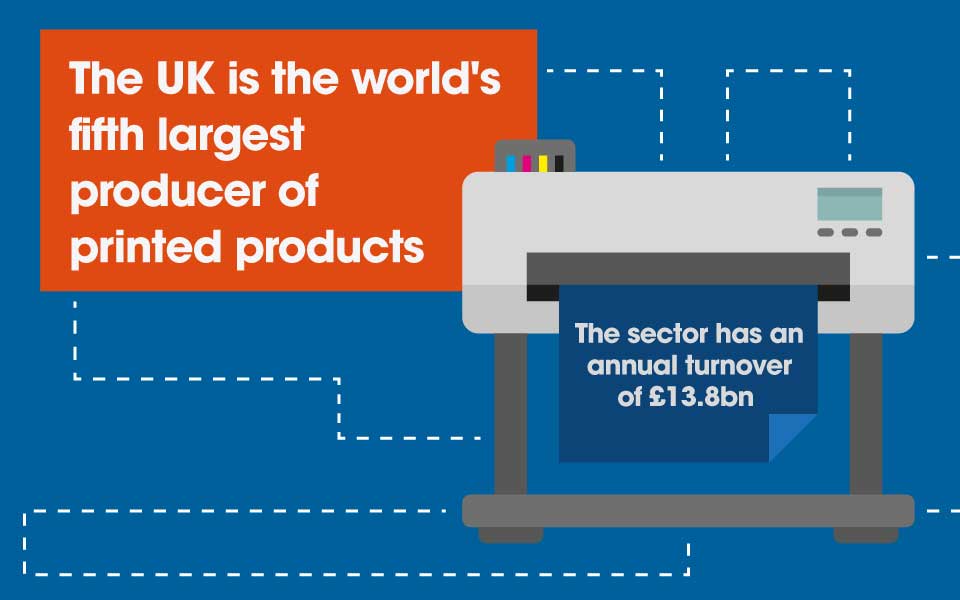 In much the same way that consumers are downloading music and films rather than purchasing DVDs and CDs, many are opting, for example, to read their news online rather than buy newspapers or download books onto handheld mobile devices.

Understandably, this trend is having a significant impact on the printing industry with the circulation of national daily newspapers having fallen from 9.2 million in 2010 to six million in 2016.

The South East has seen a 25% decrease in printing businesses overall, with even further drops of 57% in Worthing and 45% in Reading. Worthing's free weekly newspaper, the Worthing Sentinel, closed down several years ago, impacting on local businesses. Likewise, a notable closure in Reading was the town's local newspaper, the Reading Post, which ceased publication in 2014. Trinity Mirror, the newspaper's publisher, closed it with the intention of moving to a digital-only model in the county of Berkshire.

A 22% decline in printing firms has taken place in London, driven by more substantial falls of 54% in the South London borough of Lambeth, and 50% in the East London borough of Redbridge, where businesses have dropped to 30 from 60.

Meanwhile, in the East of England, there has been a 21% decrease in the sector. Contributing to this was a 44% drop in Watford, where Watford Printers, the UK's oldest worker cooperative, closed down in 2015 – missing its centenary by a few years. There has also been a 40% reduction in printing businesses in Colchester, the number of which has shrunk from 50 to 30. Two high-profile examples in the town that have recently closed their doors for good are Polestar Colchester and Colchester Print Group.

Though it may appear in decline, there’s still very much a requirement for print, for both consumers and businesses.

Printed packaging and labels is one area which is expected to buck the trend, with steady growth forecast in the coming years and a particular upturn in demand from the pharmaceutical and food and drink sectors.

In particular, print firms are seeing new opportunities in customised print services, for instance creating personalised labels on products such as Coke and Nutella, which have been enabled by modern digital press technology.

An expert’s view on the UK printing industry

With a turnover of £13.8 billion (2016), Gross Values Added of £5.8 billion and employing around 116,000 people in 8,400 companies, the UK Printing sector is an important economic contributor and employer in all UK regions.

The UK is the fifth largest printing county in the world (after USA, China, Japan and Germany).

The overall number of companies and employees in the industry is expected to continue to decline in the next few years – though the rate of this decline has levelled out. Other than a considerable drop in the aftermath of the 2008 financial crisis – industry turnover had been relatively stable.

Much of the headlines are often dominated by the changes that have been occurring in the newspaper and magazine sectors – which is facing considerable disruption from the rise of digital media and changing consumer behaviour. However, other sectors have exhibited more stability and some have seen healthy growth.

In particular the book sector has recorded strong growth in recent years, printing on to materials other than paper/board (such as signage, large format, textile and vehicle graphics) has grown, as has paper and board based printed packaging and labels. Personalised and variable data printing services are expected to grow in the coming years.

It is notable that a number of high profile brands (Ikea, Apple and Google being some examples) are returning to print or being highly positive of their use of print.

The main concerns facing companies in the industry are competitor price competition, concern over rising paper and board prices, access to skilled labour and late payment. The Brexit negotiations outcome is an additional risk for the industry to consider.

The printing industry makes a positive contribution to the UK's trade balance. There is also a significant amount of trade in the supply chain. The major material input is of course paper and board – almost all of which is imported (80% from Europe).

Furthermore, the investment market (technology, capital equipment, software etc.) is a worldwide market. As such there are concerns over uncertainty, exchange rate fluctuations, supply chain security and the impact on costs and profits. However, some companies may be in a position to exploit opportunities arising from changes in the economy, interest rates staying lower for longer or improved exporting competitiveness.