Businesses constructing roads and railways have risen by 112% from 3,525 to 7,470 between 2010 and 2017–many have seen their workloads increase dramatically over the last few years.

Businesses constructing roads and railways have risen by 112% from 3,525 to 7,470 between 2010 and 2017, and many have seen their workloads increase dramatically over the last few years. 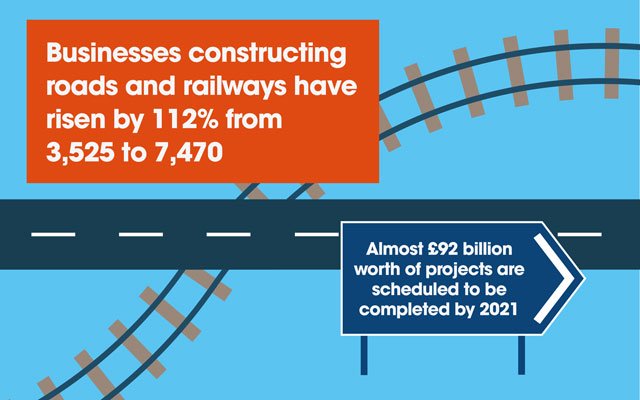 In 2014, the coalition government asked businesses constructing roads to prepare for the biggest investment the road network had experienced since the 1970s.

Today, that initiative has contributed to the government pipeline of 123 live transport infrastructure projects, worth almost £140 billion. Almost £92 billion worth of projects are scheduled to be completed by 2021.

There has also been a significant upturn in private investment in the UK rail industry, as operators move to upgrade the network, including improvements to stations, providing a wealth of supply chain opportunities.

Rail infrastructure in particular continually sees a greater level of investment in London than the rest of the UK. London's businesses in this area have seen a 409% increase, with the development of the Crossrail line driving success in the city. Crossrail will offer a high capacity, high frequency service for London and the South East, and it's estimated that the project will add £42 billion to the economy and support 55,000 new jobs. Read more about the future impact of Crossrail below.

Also contributing to the 409% growth in London is a £4 billion investment in the city's roads – the 'Modernisation Plan' intends to provide a safer environment for both drivers and cyclists.

In the South East overall, there has been a 121% rise in the number of road and railway construction businesses

The borough of Greenwich in South East London saw businesses in this sector increase by a massive 1,000%, from five to 55, which will be partly due to the area housing two future Crossrail stations, Woolwich and Abbey Wood.

The East London borough of Redbridge will also be home to several Crossrail stations when it opens, contributing to the overall business growth of 800%, from five to 45.

In the South East overall, there has been a 121% rise in the number of road and railway construction businesses. This has been fuelled by a 600% increase in businesses in both Dover and Canterbury. In Dover, this is partly due to major investment in several new roads, improving access to the Port of Dover. In Canterbury, £12 million has been put into developing HS1, the high speed train line.

Meanwhile, in Wales, there has been a 206% increase in this field, led by huge growth in the town of Merthyr Tydfil, where firms have risen from five to 80 – that's 1,500%! Development of the River Taff Central Link has contributed significantly to this, which will improve access for road users in the town centre and reduce congestion.

Also, the city of Newport in Wales has recently been selected to house a £30 million rail production facility, out of 100 potential locations across the UK. This is a major factor in the overall 600% growth of businesses in this sector.

In 2014, the government announced its intention to "triple funding” on the road network with more than £24bn of guaranteed investment to be spent on upgrading and improving the network over five years.The future looks equally positive for businesses involved in the construction of railways. Major long-term projects include: