This sector has seen significant diversification powered by the private sector. The UK is now the second largest TV exporter in the world.

Over this period, a revolution has occurred that has loosened the control of a few major players and opened the market to an army of smaller, more nimble broadcasting providers.

Four factors have driven this transformation:

According to Ofcom, the UK is now the second largest TV exporter in the world, driven primarily by growth in the private sector.

Diversification has come with greater profits. Recent data projects revenue growth in the UK broadcasting sector of 5.5% over the period 2013-18. 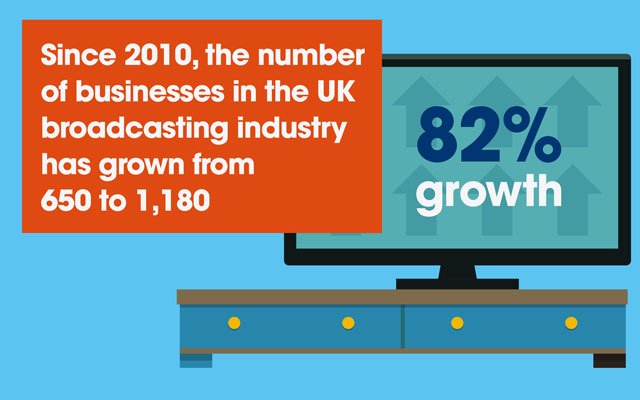 But with new technology comes new challenges. Viewers now demand instant access to hundreds of shows across multiple devices, which has created fierce competition for eyeballs – intensified by a relatively low barrier to market entry (a broadcasting licence in the UK can cost as little as £2,500).

What’s more, with the launch of on-demand services (most notably Netflix and Amazon Video), UK broadcasting companies find themselves in direct competition with American providers, whose deep pockets afford them the luxury of investing heavily in new shows without taking on undue risk.

Across the different regions of the UK, there has been varying success in the industry. As one might expect, areas in the South of England have seen greater growth, probably due to their proximity to London, and a wider range of transport options.

The South East has seen the largest increase in the UK of 131%, with the district of Chiltern in Buckinghamshire driving this. The number of TV broadcasting and programming companies in Chiltern have grown from five to fifteen in recent years. In St. Albans, Hertfordshire, the number of businesses in this sector has increased by 100%, including recent additions to the city such as BOXFX. For several years, Hertfordshire's historic landmarks and locations have made it an attractive prospect for TV companies.

Meanwhile, in Yorkshire and the Humber, the district of Kirklees in West Yorkshire has enjoyed a 100% increase in businesses in this sector. A major player in the area is Kirklees Local Television, a film production company and Internet-based TV station which provides local news and entertainment to people living in the area. In Leeds, where there has also been a growth of 100% in the field, True North is one of Northern England's biggest producers and transmitters of factual TV content across the UK and abroad.

Wales' capital Cardiff continues to be a major centre for TV production, with several well-known TV shows filmed in the city. Production of BBC1 drama Casualty has moved here from Bristol, while Made in Cardiff offers local programming to the community.

The way people consume broadcast media has evolved rapidly in the past 10 years, with growing numbers regularly using mobile devices. Virtual reality is predicted by many to be the next technology that will have a transformative effect on the industry. Although some providers such as Sky have already invested in the technology, only time will tell how significant its impact will be.

Nobody quite knows how virtual reality will affect broadcasting, or when this technology will be adopted by the mainstream consumer, but it has the potential to transform how we consume media content.