Today, the North West is the UK’s largest regional economy outside London and the South East, and its business community is known for being energetic and entrepreneurial.

Manchester has seen the biggest rise in the number of new businesses anywhere outside Greater London, with growth of 43%.

This is almost double the rate seen in Liverpool, where the number of new businesses grew by 22%, which is still above the UK average of 19%. 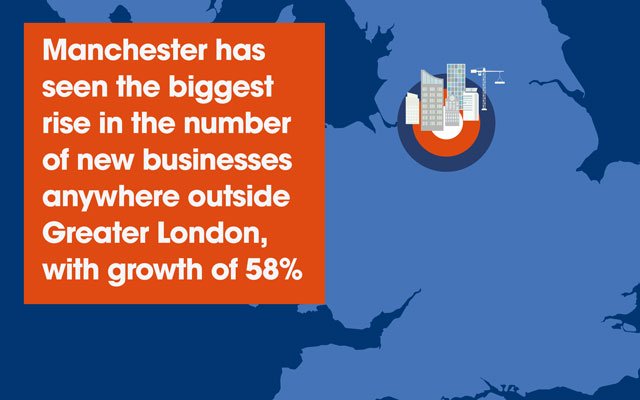 Traditionally a location for textiles and manufacturing, the North West is now a centre for banking, legal services, general insurance, management consulting and accountancy, particularly in Manchester and Liverpool, with the region benefitting from graduates from world-renowned universities.

Greater Manchester has benefitted from the founding of MediaCityUK, which has seen a host of small creative and media firms flock to set up shop at the formerly derelict Salford Quays, and is now home to the BBC and ITV.

Now there is an influx of people living and working in Salford, accommodation and food services have also flourished. This sector, which includes hotels, restaurants and bars, has enjoyed a growth of 47%.

Another success story in the North West has been transportation and storage businesses – this includes land, air and water transport companies, warehousing solutions and postal and courier services. While business numbers in this field have increased by 34% throughout the UK as a whole, the North West has seen a greater growth of 47%. This has been driven by major international businesses such as Amazon, which has seen three new warehouses open in the region in recent years.

In particular, the borough of Halton in Cheshire saw a huge increase of 139% in this industry, which is partly due to new depots opening for hauliers Tesco and Stobart Group Ltd at the Daresbury Science and Innovation Campus.

Further north, in Cumbria, there has been a very respectable 62% growth in the number of businesses operating in the financial and insurance sectors between 2010 and 2017.

Perhaps unsurprisingly, however, the current business environment in this region is dominated by agriculture and the hospitality industry, with the Lake District attracting tourists from across the UK and overseas.

Less positively, both Cumbria and Blackpool have seen a decline in the wholesale car industry, with numbers dropping 8% and 10% respectively.

Looking ahead, there are a number of exciting infrastructure projects in various stages of delivery which are designed to boost the region’s economy even further.

The area has been designated an Enterprise Zone, so firms that make home there will get a discount on Business Rates for up to five years.

The Northern Powerhouse is set to create stronger infrastructure links between cities including Manchester, Liverpool, Leeds and Sheffield, as well as investing in science, innovation and skills in the coming years, with many suggesting this will rebalance the UK economy away from London and the South East.

For further information on the sourced references for the Business Trends data, outside of the Business Population Estimates 2017 and Nomis official labour market statistics 2010 and 2017, please  download the information here (PDF, 233MB)