Small and medium-sized businesses are fundamental to the nation’s economy, making up a remarkable 99.3% of all Scottish businesses, providing an estimated 1.2 million jobs and 40% of turnover.

Most Scottish SMEs operate in the services sector, primarily retail, followed by manufacturing, construction and oil and gas.

Between 2014 and 2015, both the services and construction sector saw healthy revenue growth, of 5% and 8.4% respectively, while oil and gas fell by 10.6%, driven by the decline in the oil price.

Conversely, the number of Scottish manufacturing businesses is booming, having risen by 13%. Impressively, this is the largest growth in the manufacturing sector in any UK region, and ahead of the 5% increase across the UK as a whole. Why has Scotland seen this rise? Well, whisky production alone accounts for 1.3% of the total value of all UK exports. Also, Scotland is traditionally known for its textile industry, and its knitwear and tweed products still prove popular internationally. 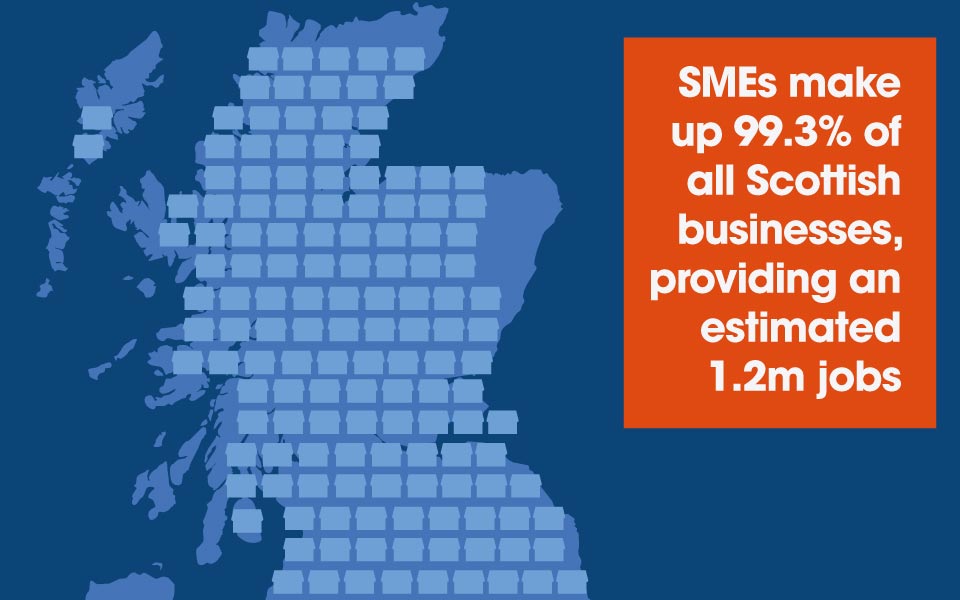 Scotland is rich in natural resources—from its imposing highlands to its spectacular coastline—and tourism is increasingly important to its ongoing prosperity.

In 2015, Scotland attracted over 14.6 million visitors who generated around £12 billion of economic activity in the wider Scottish supply chain and supported almost 200,000 jobs.

And, as SMEs make up 82% of Scotland’s visitor economy businesses, their ongoing prosperity will be closely tied to Scotland’s ability to keep attracting visitors from the UK and overseas.

In Glasgow, Scotland’s largest and most populous city, transportation and storage businesses have increased by 76%, compared to the UK average of 51%. This includes land, air and water transport firms, as well as warehousing and postal/courier services.

The Scottish Government has introduced legislation that enables it to slash, and eventually abandon, taxes on air passengers entering Scotland. This is a move to further boost the visitor economy which many Scottish business groups have long campaigned for.

One distinctive feature of Scotland’s SME community is that more than a third are rural based, often operating in the tourism, agriculture and food & drink sectors.

They face a specific set of challenges, particularly around connectivity. Firms have campaigned to improve rural access to the Internet in a bid to boost their prosperity.

A number of important infrastructure projects are being delivered during 2017, which have the potential to significantly boost the economy going forward, including connecting Glasgow and Edinburgh with continuous motorway for the first time and the Queensferry Crossing.