The South West contains a diverse mix of both well-connected, prosperous urban areas and remote rural locations, and its business landscape is just as varied.

The geographical landscape of the South West has helped to shape the business landscape, with the rural south more dependent on agriculture and tourism, while the better-connected northern and eastern counties have a more mixed economy.

The region’s largest city, Bristol, for example, once thrived on maritime trade and seafaring, but has since established itself as the hub of a South West manufacturing centre that dominates the UK’s aerospace and defence sectors.

Of the 15 leading international aerospace manufacturers, 14 have bases in the region, including Airbus, Rolls-Royce and AgustaWestland, which has helped to foster a strong network of SME supply chain companies.

The South West aerospace supply chain contains 800 firms, many of which have established world-class reputations, employing 57,000 people across the region. 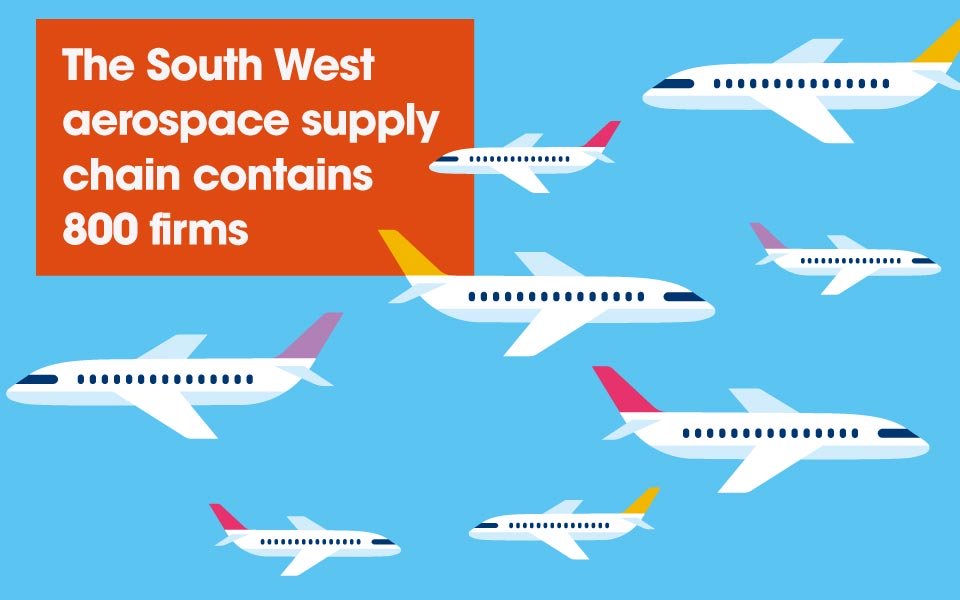 And SMEs in the region have been praised for their willingness to join forces and collaborate to win new business in both the civil and defence aerospace sectors.

There was a notable increase in the number of transportation businesses in Swindon and Bristol in this period, which grew by 115% and 103% respectively. Some of this growth could align with the commencement of the Joint Local Transport Plan, a 15 year plan for transport investment in the West of England, in 2011.

Education businesses have also grown by 36% in the region, compared to just 18% for the UK as a whole. This accounts for all levels of education, from pre-schools to universities, as well driving schools, sport and recreation centres, and other types of educational establishments. One particular success story has been the Phoenix Learning and Care Group, which provides educational services for those in need. The group secured funding in 2017 to support their future growth within the South West.

The South West’s SME sector is dominated by so-called micro businesses employing up to nine people, which is also the fastest growing business sector by size in the region.

Many new start-ups are in the knowledge-based industries, including digital media and financial services.

Bristol and Bath’s position on the so-called ‘M4 corridor’, a community of large and small technology businesses along the route of the motorway between London and South Wales, has helped to foster around 35,000 tech jobs in sectors including app and software development, digital advertising, gaming and telecommunications.

Bristol is also one of the UK’s main financial hubs, with particular specialisms in insurance and banking, and houses the back-office functions of a diverse range of businesses, particularly building societies.

Another city in the region, Plymouth, has seen a 60% increase in water supply and sewerage companies.

Looking forward, the government has approved plans for a £1.6 billion upgrade to the A303 which will link the M3 and the M5, unlocking growth in the tourism industry that is predicted to support 120,000 new jobs.