The A370 in North Somerset joins up-and-coming Bristol with the seaside resort of Weston-super-Mare. Doesn't exactly sound X-rated does it? But the statistics tell a different story and the A370 is every bit as risky as its top ten most dangerous in the West Country status suggests.

On the face of things, it’s a perfect biking route. Winding and rural, it’s a blast to leave Bristol’s urban gridlock behind, giving your bike a lungful of fresh air and octane as you head for the coast. It’s a road that helps blow out the cobwebs and leads to a place where you can both breathe a bit of restorative sea air and watch the age-old battle between chip-eating human and chip-wanting seagull, and all without putting a wheel on the jam-packed M5.

What’s not to like then? Well, it may look good on the map but in reality the A370 is plagued by modern life. As a heavily trafficked commuter and holiday route, it’s littered with multiple distractions from undivided three-lane sections and experimental high occupancy commuter stretches to muddy farm entrances and lane-blocking bus stops.

Pinballing between dual carriageways and small towns means you need to concentrate doubly hard on your speed and, if you like your licence, on those speed cameras too. But there’s a good reason for them here. Tired commuters, dawdling caravans, thunderous HGVs, mud-dropping tractors, wobbling cyclists, school run parents with erratic children and yes, less experienced weekend bikers all inhabit the A370 - and frequently all at the same time. It’s not a road to play with.

Still want to go to the seaside? No problem, just don’t ride like you think your ice cream’s going to melt. Keep those spidey senses on full alert, ride safe and arrive alive. Oh, and if you get peckish in Weston, do be careful of the seagulls. 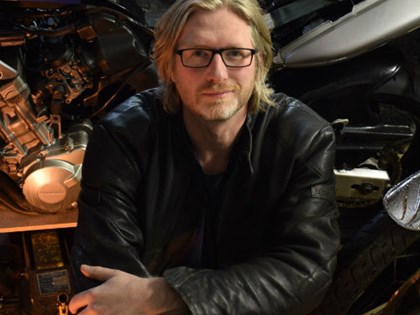 Armchair Biker is a bike blogger and freelance motorcycle magazine writer specialising in everything from the maintenance of modern classic machinery to how not to fall off it. Riding for 28 years in the UK and Europe on a variety of machinery, his regularly updated and well-received blog is written for UK riders.

The Swinton View on Riding the A370 in North Somerset

Although motorcyclists make up just one per cent of road traffic, they account for nearly one in every five road-user deaths. Because you’re more vulnerable on the road riding a motorbike, it’s hugely important you take every precaution to stay safe.

Wear the right safety gear, know your route, plan for the weather, and give yourself plenty of time to finish your ride without rushing. It’s also vital that you’re fully insured and that your motorbike insurance policy covers everything you need it to. Enjoy the ride!