Adhering to the speed limit is one of the most important things you can do as a driver to keep yourself and others safe.

But with so many different types of roads and vehicles used in the UK, it can be tricky to work out what speed you should be going at and when — especially if it’s not clearly signposted.

In this guide, we explain all the key things you need to know about the UK speed limit. We’ll cover what the National Speed Limit is, what can happen if you’re caught speeding, and practical ways you can keep your speed under control.

What is the National Speed Limit? 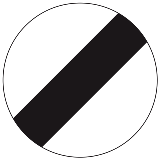 What is the speed limit on a dual carriageway?

The speed limit of a dual carriageway is 70 mph, the same as a motorway.

A dual carriageway is two single lanes going in opposite directions that are divided by a barrier — essentially, a motorway with only one lane on each side. Sometimes, the barrier can be a grass verge; others, it’s made of metal or concrete.

What is the speed limit on an A-road?

The speed limit for ‘restricted roads’ is typically 30 mph.’Restricted road’ is the technical name for one that’s in a built-up area. If you can’t see any speed limit signs in an area with street lighting and buildings, stick to 30 mph to be safe, until you spot a sign that dictates otherwise.

Unrestricted single carriageways — such as country lanes — can sometimes have a higher speed limit, up to the National Speed Limit of 60 mph. Roads without a physical divider between the two opposing streams of traffic are classed as single carriageways.

What is a variable speed limit?

You can learn more about smart motorways in our motorway driving guide .

Is the speed limit different if you’re towing?

Yes — vehicles that are towing trailers or caravans have a lower National Speed Limit in place that they have to adhere to. The same applies to other vehicles that are larger than cars, including buses, motorhomes and heavy goods vehicles.

Here’s how the National Speed Limit differs for various vehicle types when driving in the UK:

How does a speed camera work?

Speed cameras use detectors in the road (or radar technology, depending on the type of camera) to record the speed of passing vehicles.

If the camera detects a car going over the speed limit, it takes a digital image. The camera records the following information:

While not all cameras can take an image of the driver’s face, most are angled in a way that will give the police some insight into who might have been driving the vehicle at the time of the incident.

More advanced cameras are linked to traffic light cameras that monitor lights and junctions too. These cameras can also detect when you’ve gone through a red light, and administer a fine accordingly.

How fast do you have to drive to be detected by a speed camera?

Contrary to popular belief, speed cameras do not have a 10% tolerance for speeding as standard. That means if you go even 31 mph in a 30 mph area, a speed camera can take your picture.

How do I know if I’ve been caught by a speed camera?

Many people believe that you’ve only been caught by a speed camera if it’s flashed. This isn’t true, as newer cameras have recently been introduced that no longer need to flash in order to capture a high-quality picture.

You’ll find out if you’ve been caught speeding within two weeks of the incident when a Notice of Intended Prosecution (NIP) is sent to your address; that is, the address registered to the vehicle. The NIP will include a request to provide driver details in case someone else was driving at the time.

If the car's owner wasn't driving then they must let the police know the name and address of the person who was.

Penalties for breaking the speed limit

How much over the speed limit can you go before getting a ticket?

Technically, you can be issued a ticket for driving even just 1 mph above the speed limit. Though this is unlikely, drivers should always be aware that it is a possibility with legal precedent, so it’s always safer to drive just under the speed limit.

How much can you get fined for speeding?

However, since 2017, new laws have come into force that have changed the penalties for moderate and serious speeding offences. Today, your penalty can be determined by two key factors:

Instead of fixed penalties based on your speed, the fine you’ll pay is relative to the amount you earned. This is calculated with the following formula:

Can you go to prison for speeding?

In very serious cases in which offending drivers go to court, the outcome could result in a prison sentence of up to five years. More often, though, serious speeders are given a driving ban instead.

What is a speed limiter?

With either type of speed limiter, you’ll be unable to go beyond the top speed unless you push hard on the accelerator – this might be required in certain situations where it may be safer to speed up.

By 2022, all new cars sold in the UK and Europe will have speed limiters, under changes to vehicle safety rules that have been provisionally agreed by the EU.

Which cars have speed limiters?

Many types of cars have speed limiters. Adjustable limiters are the most common, and they’re often included as standard on most vehicles, or available at an extra cost. Intelligent speed limiters are currently less common but will become more regularly seen following the change in 2022.

Is a speed limiter the same as cruise control?

No — a speed limiter prevents a vehicle from travelling over a certain speed, while cruise control maintains a specific speed that’s been set by the driver. You’re in full control of your vehicle when using a speed limiter, but cruise control takes over the accelerator, adjusting the power when required.

Like cruise control, speed limiters can also be overridden by the driver, who can switch it on and off when necessary.

Knowing the speed limit in all scenarios and putting in place measures to keep on top of your speed will almost always make you a safer driver. Better still, a clean driving record can help you get cheaper premiums on your car insurance, so you save money too.

Find out more about our Car Insurance today.