The UK is packed with some of the best locations in the world, from our fantastic cities and breath-taking coastlines to our rolling green countryside.

This love of our towns, cities, counties and regions has seen huge sections of the population choose to lay down some additional roots in their favourite location, through the purchase of a second home.

But where are the most popular areas? Whilst you may expect much of Wales, the South Coast and the South West to be amongst the top hot-spots with the highest number of holiday homes, what about those spots that are up and coming? And are our cities now getting in on the action too?

We looked into it by tracking the number of second homes across England, Scotland and Wales from 2010 to 2018 to find out where is on the up and which locations are struggling. 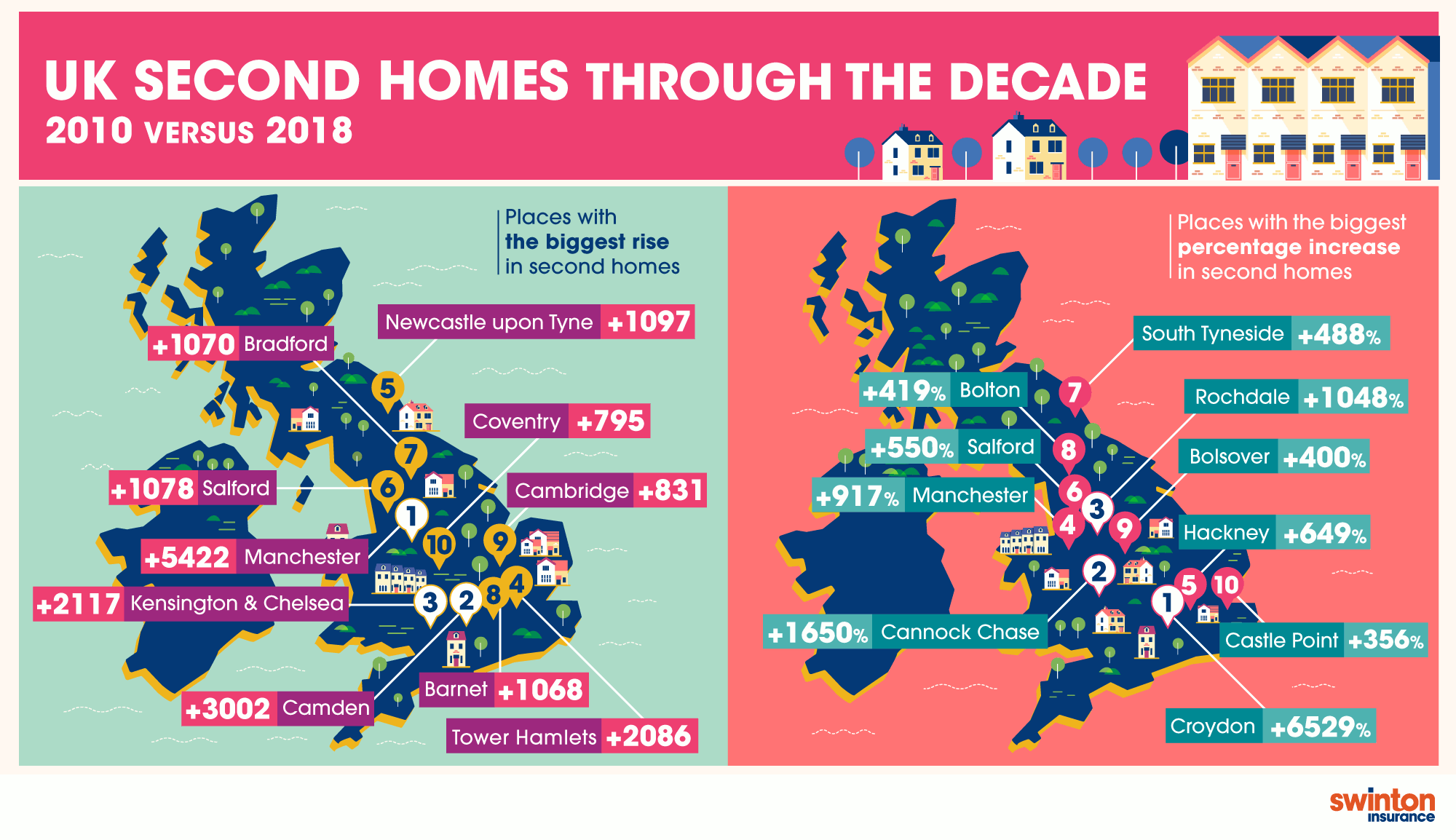 The biggest rise in the number of second homes

Our map illustrates that the Northern powerhouse Manchester is top of the tree with a total of 5,422 new second homes between 2010 and 2018.

Newcastle upon Tyne makes it into the top five with 1,1097 additional second homes, with Salford, Bradford, Barnet, Cambridge and Coventry all in the top 10.

It seems to be all about the cities when we’re focusing on the volume of new second homes.

Whilst an increase in the sheer number of second homes is one thing, what about those locations that have seen the biggest percentage growth?

Croydon is in the number one spot, with a percentage increase of 6,529% , followed by Cannock Chase (1,650%), and Rochdale (1,048%). Manchester also makes an appearance in the top 10, as does northern neighbour Salford - the only locations in both top 10s.

A Flourish data visualization
In England, we’ve seen the steepest incline in the North West. The region itself has enjoyed second home success with an increase of 43%, with Greater Manchester topping the bill with 224% growth from 2010 to 2018.

Specifically, Manchester had just 591 second homes in 2010, increasing to 6,013 in 2018. The increased investment in the city, and potential for job opportunities with the likes of the BBC moving to MediaCityUK has seen many people make the move north from London. Could this be behind Manchester’s second home growth?

Other regions that have seen a positive change in this time include the East of England (7%) and Yorkshire and the Humber (6%), the latter driven by the 352% growth seen in Wakefield.

Cambridgeshire has seen the most improvement in the East, up by 40%, driven by the 68% increase in Cambridge, while Hertfordshire has seen a 10% decrease.

The area of England that’s suffered the most has been the West Midlands with a drop of -25%. This is despite positives in Staffordshire (48%), Warwickshire (21%) and Worcestershire (18%).

The decline has occurred in the West Midlands due to significant drops in Sandwell (-93%), Birmingham (-80%) and Solihull (-70%). A potential reason behind this may well be due to the lack of employment opportunities in the area, with the unemployment rate in Birmingham in 2018 being twice the national average.

London, the East Midlands and the South East have seen slight decreases at -4%, -6%, and -4% respectively, whilst the South West has plateaued with a 0% increase across the region. This represents the continuing and historic popularity of areas such as Devon, Dorset and Somerset for holiday homes. They are just as popular in 2018 as they were in 2010.

Sophie is a 30-year-old professional who purchased her second home in Manchester after moving up from London to pursue her career.

“The process was pretty smooth, I had a mortgage broker and had spoken to people who have more than one property who advised me and helped me when it came to stamp duty and moving my first mortgage to a buy to let. However, managing the properties is a lot harder than I anticipated. Any property isn’t cheap, if anything goes wrong I have to pay and fix it very quickly especially if I have tenants in.”

A Flourish data visualization
With a variety of regions and towns popular for holiday homes, it’s no surprise to see an increase in the number of second homes across Wales.

It’s important to note, however, that the fluctuations across Wales aren’t as stark as the rest of the UK, reflecting its heritage as a holiday destination.

When it comes to specific areas, we’ve seen the biggest change in Denbighshire, with a 90% increase in second homes from 2010–2018. Whilst the incline has been fast, the actual number of second homes remains a small figure, increasing from 230 to 437 in this time. This has occurred despite recent efforts from the council to combat the number of second homes in the region.

Gwynedd itself may have suffered a little over this time period, decreasing by 14%. However, it still remains the most popular location in Wales for second homes, with a total of 4,815 in 2018.

South Western Scotland, Eastern Scotland and North Eastern Scotland have suffered the most, decreasing by 43%, 43% and 41% respectively. Even the Highlands & Islands have struggled slightly, with a 13% decrease. According to recent research, this is down to higher taxes on second homes and ongoing economic uncertainty in the region.

Within the East of the country, the biggest percentage drops have been seen in Falkirk (-87%), West Lothian (-84%) and Clackmannanshire (-83%). Edinburgh is an interesting case; the city has seen a 56% drop, but has suffered the biggest loss in terms of the number of second homes, dropping from 4,589 in 2010 to 2,016 in 2018. Despite the drop in number of second homes owned by UK residents in Edinburgh, it remains extremely popular with tourists from abroad, being the most visited city outside London.

Sally is a 64-year-old business owner who owns several properties (six including her farmhouse and two rental properties on the same site) across the UK. She most recently bought a property in Cornwall.

“If I was going to purchase again, I’d consider buying in Scotland if the right property came up in the right place as we love holidaying there - and potentially London if prices went down further because of Brexit. I’d get a good value house to do up and improve to make profit as there’s always demand for high-quality housing in London.”

To predict the top potential locations for second homes in 2020, we’ve analysed the fastest rates of growth across the last two years to find those spots that are set to continue their upward trajectory.

Tied in the top spot are Basingstoke & Deane and Southampton, who have both enjoyed a growth increase of 37%. This is closely followed by Brentwood (35%), Newcastle-under-Lyme (27%) and Warwick (25%).

A Flourish data visualization
Now we’ve found out where the most popular places in the UK to buy a second home are, what sort of insurance cover is required? If you’ve got a second home, or if you’re looking to purchase one, there are several things to consider, such as whether the property will be let, how long the property is left unoccupied etc – find out more about Second Home Insurance.