How to have a safe summer BBQ

According to new figures*, Manchester has the highest number of BBQ-related fires in the UK, with over 100 callouts reported by Greater Manchester Fire and Rescue in 2018. Here, we take a look at how not following correct BBQ etiquette can have dangerous and costly repercussions, and how you can stay safe this summer.

As the sun comes out and the temperature rises, we Brits are expected to be out in our gardens and enjoying our BBQs. But before you throw your bangers and burgers on the grill, it’s important to follow the advice from fire services, plus have the right Home Insurance in place, should the worst happen.

And while you’ll be covered by most insurers for fire damage to your home and contents, as well as for legal liability if a blaze caused by your BBQ damages someone else’s property, if a fire is caused by negligent behaviour, e.g. being drunk, it may result in a claim being reduced or not being paid at all.

Always check your Home Insurance policy, so you know exactly what you’re covered for. 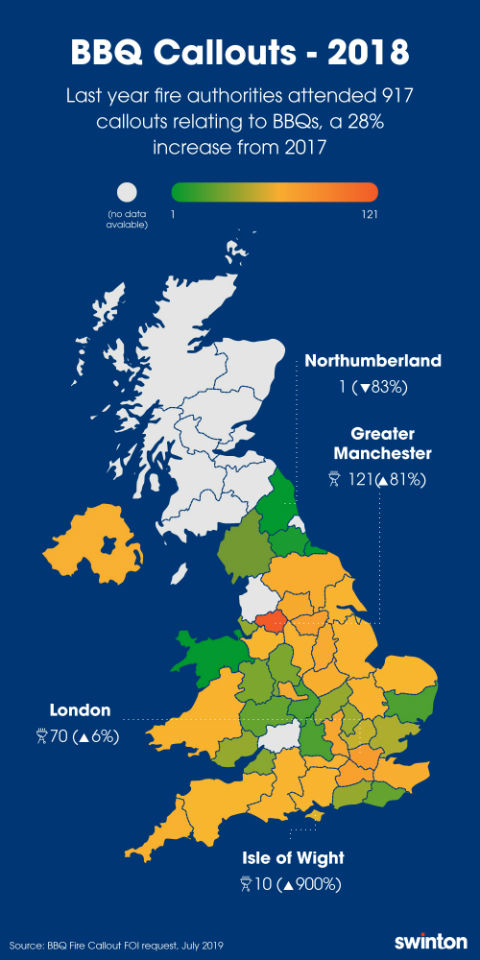 Most BBQ-related callouts in the UK

After Manchester, London had the second-highest number of BBQ-related emergencies, with 70 incidents reported by London Fire Brigade in 2018.

Unfortunately, London has already seen a large blaze caused by a BBQ this year: In June 2019, 20 flats were destroyed and 10 were damaged in Barking. The fire was thought to have originated from a BBQ on a resident’s wooden balcony.

Let’s take a look at the areas with the most BBQ-related callouts:

The consequences of fires caused by BBQs can be devastating. As well as the incident in Barking, April 2019 saw more than 700 acres of National Trust moorland in West Yorkshire destroyed by a blaze started by a BBQ at a picnic spot.

So, how can you ensure your BBQ is a safe one? Here are our top tips:

Home insurance to suit your needs