How do you drive safely on a smart motorway? What are the laws surrounding them?

If you're not sure, you're not alone. Research from Europcar UK has found that Brits are confused when it comes to the rules around smart motorways.

From speeding fines to 'Red X' signs, we're here to put your mind at rest. Here's everything you need to know about smart motorways.

What is a smart motorway?

A smart motorway is a section of a motorway that uses technology to manage the flow of traffic during busy times.

Operators can vary the speed limit – which can be seen through signs on the overhead gantries. This is to reduce the frustrating stop-start driving conditions that often occur on normal roads.

Warning signs can also be activated to alert drivers of traffic jams and any hazards ahead. Lanes can also be closed to allow emergency vehicles through.

What types of smart motorways are there?

Whilst all enforce variable speed limits, there are actually three types of smart motorways, with the use of the hard shoulder being what differentiates each: 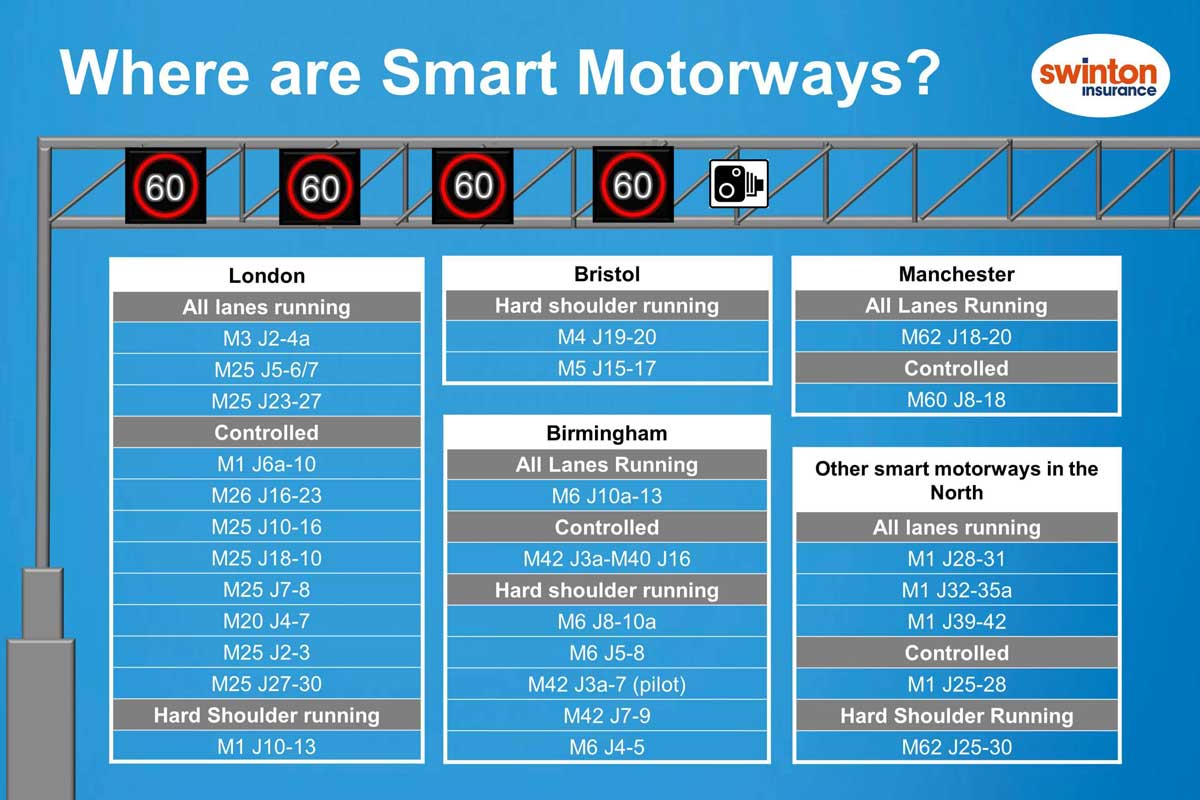 Can I be fined when driving on a smart motorway?

As with standard motorways, there are a number of ways you can be fined. Here's a rundown of things to be aware of, so you don't get caught out.

Data obtained by The Times revealed that 72,348 people were fined on motorways with variable speed limits in 2017. This was almost double the number a year earlier and a tenfold rise in five years.

With more speed cameras and variable speed limits, there is a greater chance of you being caught by cameras, so it is vital you are always checking the overhead gantries for any speed changes.

In addition, many speed cameras on smart motorways operate 24 hours a day and not just when variable limits are being enforced. This means even if the overhead gantry isn't signaling a reduced speed, the cameras are still monitoring if you are exceeding the national speed limit.

A 'Red X' sign is used to identify when a lane is closed and indicates that you should carefully move into an open running lane.

This year Highways England introduced fines for motorists who ignored 'Red X' signs. If you fail to recognise 'Red X' signs you could face a £100 fine and three penalty points.

How can I drive safely on smart motorways?

Here are some quick tips from Highways England for driving carefully on a smart motorway:

What if I breakdown on a smart motorway?

If your car grinds to a halt on a smart motorway, these five steps will help you stay safe:

1. Move to an emergency refuge area (ERA), if you are able to do so safely. These areas are marked with blue signs and have an orange SOS telephone symbol on them. Different types of smart motorways have different spacing between ERAs, however the furthest you will be away from one is around 1.5 miles.

2. If you cannot get to an emergency refuge area, you should try to get onto the verge, unless there is a safety barrier.

3. Ensure you switch your hazard lights on.

For more information on what to do if your car breaks down click here.

Or to learn about breakdown cover, visit https://www.swinton.co.uk/car-insurance/breakdown-cover/

Driving Under the Influence: What You Need to Know

What To Do If

Driving, Driving in the UK

Driving, Driving in the UK