What’s Life Like Behind the Scenes for UK Taxi Drivers?

Whether they’re putting their foot down to get you to work on time or working the late shift to get you home safe from a night out, our taxi drivers are a much-loved and much-needed part of everyday life. But just how much do we really know about our four-wheeled heroes?

To help shine a light on the day-to-day lives of UK cabbies, we asked 46 drivers, based everywhere from Edinburgh to London, a series of questions about their careers. From their first year driving to a whopping 36 years on the job, you can be sure that they had plenty of stories to tell.

We’ve picked out the weirdest and most wonderful stories to help give you an idea what a day driving the British public from A to B is really like. So, if you’re curious about what your taxi driver has in their lunch box or want to know the strange requests they get when on a daily basis, then read on to find out...

While most of us are settled into the usual 9-to-5 workday, this isn’t the case for our cabbies. We found that most of our case studies worked the night shift, which mainly consists of the early AM. No surprise then that coffee breaks were mentioned on a lot of occasions. One Glasgow taxi driver had this to say: “My usual workday is 6pm—6am… so if I’m not driving a customer I’m usually drinking coffee.”

A huge factor that can make a difference to a driver’s routine is whether or not you own your own cab, as a couple of our case studies do. This gives you a lot more freedom to pick the hours you work, as a Paisley case study said: “I own my cab so I only work the busy hours and then go home.”

What’s the longest journey you’ve ever had in one single customer trip?

For those of us who are used to catching a taxi to the airport, or from the city centre to our homes, it can be hard to imagine travelling cross country in a cab. However, it turns out that this is more common than you think. In fact, four of our case studies have had the gruelling task of making the 220-mile journey from Glasgow to Liverpool. One dedicated driver even quoted their longest fare as 980 miles…

What do you tend to eat whilst on shift?

Getting something to eat while on the road is no easy task, but to stay awake and alert (especially in the early hours,) it’s a vital one. When your job requires you to spend constant hours sitting down, it comes as no surprise that you might want to put some thought into your diet. As an Edinburgh cabbie put it: “Sitting down all night isn't the best for your health, so I try to keep my diet as healthy as possible. I tend to have water and fruit in the car during a shift to keep me going.”

That doesn’t mean that there isn’t time for the odd treat though. One case study from Bromsgrove answered: “Usually a quick sandwich and the odd jaffa cake, but we do have kebab Tuesday in our office!”

What's the weirdest customer request you've ever had?

Working with the public day in, day out is as unpredictable as you’d imagine it to be. Sometimes a trip isn’t as simple as picking someone up and dropping them off at work. While you may expect a dinner invite here and there, as a couple of our case studies experienced, some customers went even further.

When asked the question, one Glasgow driver responded: “I've had lots of strange experiences! The weirdest one has to be the time I was invited to a wedding after only speaking to the customer for about 3 minutes.”

Surprisingly, this isn’t the most intimate request that was reported. One driver recalls: “A client once asked if I could put their shoes and socks on for them…”

It would seem many clients also consider themselves to be part-time DJs. A driver with 7 years on the job quotes his strangest request as: “Being asked to play ‘Titanic’ whilst driving a customer home from a night out.” 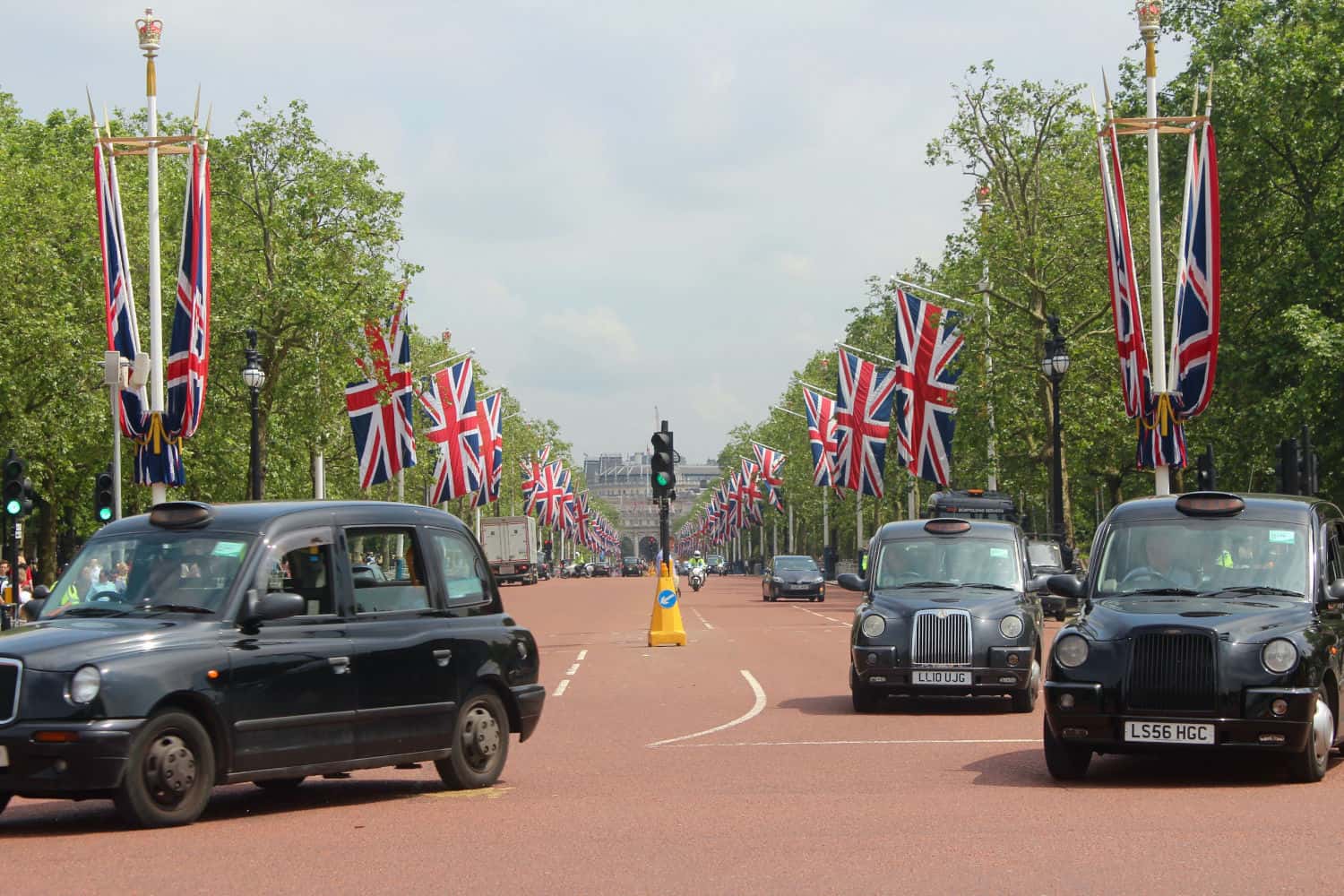 What’s the most memorable moment of your taxi career so far?

Such strange requests make for pretty memorable shifts, so picking a standout moment can be quite a struggle. When asked to choose just one, the answers ranged from the dangerous to the heart-warming.

This moment from a Livingston-based driver is enough to leave anyone shaken: “I used to work for a private hire prior to getting my black cab license. One of my customers at the time requested to go to an address with warehouses and then got a knife out and demanded me to hand over all my money made. it shook me but made me determined to get my black cab license to ensure my safety.”

Many responses highlighted the fact that cabbies can take on unforeseen roles. This can often be the role of an ambulance driver, as three drivers found when taking pregnant women to hospital to give birth — with one Sunderland respondent actually helping the lady give birth to twins. Or, it can be the role of a relationship expert, as a Glasgow driver found when helping a man pick out a ring for his soon-to-be fiancée.

The job is always worth it though when certain clients show their gratitude. One Cheltenham driver recalls: “I once helped a woman out who didn’t have the fare for the journey at the time. She ended up looking for me and 8 weeks later found me and wanted to pay.”

In some cases, you can even make a friend for life as this Bromsgrove cabbie found out: “I left one private hire company to work for another. One of my regulars gave me a big hug and thanked me for the time I took to talk to her and her husband. He'd recently had a stroke and I'd always taken the time to listen to both of them whenever I picked them up. I still speak to both of them now.”

Have you ever picked up a celebrity? If so, who?

One perk of being such a widely used service is that sometimes your cab-seat can end up being star-studded. Plenty of our case studies have driven a celebrity or two in their time. From the two Scottish drivers who have shared their cab with comedian Billy Connolly, to the Newcastle based driver who has given a ride to the Geordie Shore cast, the celebrity sightings are plenty.

It also seems the wizards of the world have to put down their broomsticks from time to time, as one Edinburgh cabbie reported giving a lift to author JK Rowling, while another has shared a seat with Harry Potter himself — Daniel Radcliffe!

Do you feel there is a sense of community in the taxi industry? If so, how?

While we’ve learned that clients can be unpredictable, we also wanted to know more about the relationship between cab drivers and their community and, for the most part, responses were positive.

A theme that recurred throughout our case studies was that the community isn’t as strong as it used to be. One touching response from a Norwich based driver, who has been in the industry for 34 years, said: “There’s not as much of a sense of community now, but I’ll never forget the 100 taxis that turned up to follow my dad’s hearse to the chapel. This is something we always used to do when a fellow driver passed away. We still do it today, but smaller numbers turn up now.”

A factor that seems to be dividing the community is the separation between black cabs and private hires. As one driver of ten years put it: “I think there are two different taxi communities, one made up of black cabs and one of Uber drivers. Saying this, there is mutual respect for everyone. It's a tough job sometimes, so we’ll all sympathise with one another.”

Of course, your experience can depend on where it is you’re based. Our Bromstage respondent quoted: “Oh yes, where I work most drivers know each other by sight and exchange banter with each other on a daily basis!”

What’s the highlight of your job?

With all its ups and downs — and plenty of challenges — it’s important for cabbies to remember what it is they love about their job and why they stick with it. Nearly every driver we spoke to cited meeting interesting people every day and being their own boss as their top perks. As one Edinburgh driver summarized, they enjoy the freedom of “Being able to work for myself and have lots of interaction with the public.”

This freedom allows for incredible benefits when it comes to family, a driver of 4 years quoted their highlight as: “Being able to be there for all the plays and football practices of my two kids because of my flexibility.”

At Swinton, we know that taxi drivers play a huge role in keeping the nation moving, so we want to ensure they’ve all got enough protection. Having the right taxi insurance can give you peace of mind when out on the road and ensure that you’re covered, should you need it.