For the motorcycle addict there is little better than the cathartic but focused, mental entrancement of riding on an open winding ribbon of road streaking out across a beautiful rolling wild landscape, a road like an enchanting siren seductively calling out for a power connected twist of the right wrist. The Birmingham A4040 isn’t anything like that, or remotely close.

It’s one of those outer city centre arterials cobbled together from bits and pieces of roads, a messy assortment of odds and sods united Heath Robinson-style into a common “A” road designation.

There`s sections of dual carriageway, narrow parts with parked cars on both sides, awesome monstrous T junctions, strange deformities where the two lanes of a standard road split apart like an aneurysm with a pointless miniature wood in between and fiendish mega roundabouts where cruel fate stalks you from multiple directions. There`s every hazard known to man, copious amounts of street furniture, shops, suburban houses, a major prison, the odd overflowing skip and ominously the West Midlands medical rehabilitation centre, just to focus the mind.

For the motorcycle addict there is little better than the cathartic but focused, mental entrancement of riding on an open winding ribbon of road streaking out across a beautiful rolling wild landscape

There`s no accounting for taste but I would be so bold as to assert that almost nobody would ride this road for fun. If you’re on a bike on the A4040 then chances are that you’re going somewhere, just on your way from A to B, commuting to work or on an errand, mind on the future, not really focused on the immediate world.

Thing is, that`s the same scenario for everybody else, mother taking kids in the car, white van man, bus driver (it`s a major bus route) and as every experienced biker knows that`s precisely when it happens. Unobservant right turn across your path, someone pulling out of a junction, vacant eyes, zombie like, looking straight through your magical transparency, focused inwardly on the latest irritating challenge presented by life.

So what`s to be done? Certainly not nothing; a tranquil passive fatalism might be the order of the day while gazing out over a Tibetan plateau but on the A4040 in downtown Birmingham on a wet Tuesday it’s just dumb. There’s much you can do, of course, to mitigate the impact of any, well err, impact.

Starting from the feet upwards, a good stout pair of biker boots and not your work shoes is a good idea. Kevlar plate inserts in motorcycle trousers and jacket, gloves with Kevlar knuckle protectors and a helmet that actually fits (chosen with the expert help of a sales assistant and not just bought off the Net). A high-vis vest is very worthwhile.

A “day-glow” garish top isn’t considered very cool for the young fashion conscious biker but then the A4040 isn’t a very cool road and nobody’s going to notice how stunningly wonderful you look, in fact that’s the point, no one’s going to notice you at all.

As an Optometrist specialising in eye protection and sports glasses my part of the sermon is vision. You can’t legislate for what other people can or can`t see but your own visual acuity can play a significant part in reaction times and avoidance reflexes, so get an eye test and glasses even if your prescription is relatively low.

Conventional specs don’t fit well with a helmet so a well designed pair of biker glasses is a good idea, they slide in nicely between your head and the padding, sit comfortably, offer added impact protection and if for example they’re Tranistions light changing tints they will double up as a pair of quality, edgy looking shades when your off the bike.

It’s an interesting observation that the smaller the motorbike often the less well kitted out the rider is, as if little bikes are protected by divine will or perhaps it’s that people feel silly all leathered up on a moped but the truth is most serious accidents happen to small commuter bikes at relatively low speed in traffic.

I hope I haven’t been too hard on the A4040, I’m sure somebody loves it, but then again it won’t be offended, it’s inanimate and although the people who are working the vehicles are very much alive there’s no collective power orchestrating their synchronised movements. There’s no plan so there’s no reason that the worst should happen but equally there`s no reason that it shouldn’t. In the end the only person in control of the effect of any outcome on yourself is you.

It’s all about taking responsibility to control what you can. Well that`s the preaching over but you are worth it aren’t you? Because just like the A4040 somebody loves you; characterful and imperfect amalgam you may well (like most of us) happen to be. 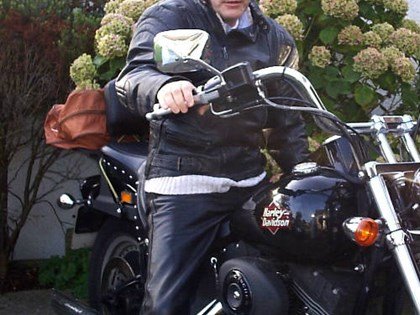 Andrew graduated from Bradford university in the early 1980s with a degree in Optometry and later a masters in visual science and has worked as an Optometrist for 35 years. He combined his love and experience of adventure sport with his professional interests and started an online prescription sports eyewear company called Rockspex, providing protective sports eyewear for many activities, particularly focusing on biker glasses.

The Swinton View on Riding the A4040

Although motorcyclists make up just on percent of road traffic, they account for nearly one in every five road-user deaths. Because you’re more vulnerable on the road riding a motorbike, it’s hugely important you take every precaution to stay safe.

Wear the right safety gear, know your route, plan for the weather, and give yourself plenty of time to finish your ride without rushing. It’s also vital that you’re fully insured and that your motorbike insurance policy covers everything you need it to. Enjoy the ride!